The turn of the 13th century was a time of intense building activity in Paris: the construction of Notre-Dame cathedral had started in 1163 under the supervision of Maurice de Sully. But the city was also a flourishing center of cultural and intellectual life that saw the foundation of the university and the composition of the first polyphonies of the Notre-Dame School… Around that time, one witnesses a marked evolution in poetic genres expressing Marian devotion. The prose of Adam de Saint-Victor († after 1146), a former cantor at the cathedral, is included in the Missal [cf. n°3 & 8]. Another influential figure is Philip the Chancellor, a chancellor of Notre-Dame (ca. 1165-1236) [n°10], who sometimes collaborated with Pérotin († 1238?), succentor of the cathedral and the most famous member of the Notre- Dame School [n°11]. Gautier de Coincy (1177- 1236), prior of the abbey of Vic-sur-Aisne, brought the art of contrafactum to perfection and set his Miracles de Notre-Dame to music [cf. n°12 & 16], drawing inspiration from Parisian melodies. In one of his more than 400 cantigas de santa Maria [cf. n°6], the Spanish King Alfonso X “the Wise” (1221-1284) describes the composition of one of Adam de Saint-Victor’s most famous pieces: the prose Salve mater salvatoris [n°8]: as inspiration fails him, the poet begs Mary to finish this prose for him. Mary agrees, for she is eager to help those who sing prose in her praise. She inspires him with nobile triclinium, a powerful, concise and innovative image presenting her as the sacred vessel through which the Holy Trinity lavishes divine love on mankind. More traditional imagery also describes Mary star of the sea.

Almost all later Marian poetry is modeled after the 8th century hymn Ave maris stella [n°1]. By praising the Lord’s sweet mother (Dei mater alma), the hymn highlights the divine maternity of Mary, the peerless mother [n°5]. As such, she strengthens the covenant between God and mankind [n°11]. The greeting of the Archangel Gabriel – Ave – opens many Marian prayers (cf. Ave Maria [n°2, duplum]). And the hymn goes on: receiving this Ave…you transformed the name of Eva. Ave / Eva, this play on words could not but inspire Gautier de Coincy, himself a master of the genre: Ève nous a livrés à la mort… mais Ave nous a tous délivrés, (Eva sent us to our death… but Ave set us all free) with an additional play on sound: Et Eve aporta ve (Eva brought us evil) / Et mist a port Ave (“Ave”brought us back safely to shore) [n°12]. Mary is also the mother [who conceived] without a man [n°5] the virgin who remained a virgin when she gave birth [n°11], the unique Virgin, meek above all others [n°1], flowering by her virginity [n°10]… 12th and 13th-century poetry paved the way to a form of prayer known as litanies,  characterized by rich and extremely vivid imagery. Listen to the prose Salve mater salvatoris [n°8] by Adam de Saint- Victor, largely inspired by the Song of Songs (cf. Ibo mihi [n°7]), or Philip the Chancellor’s O Maria virginei 3-part sequence [n°10] a piece most remarkable in the way it combines language and music. The French “lai” Virge glorieuse [n°14], an anonymous contrafactum of a monodic sequence by the same Philippe the Chancellor, also shows rich and inventive imagery.

Nothing is too much in praise of the graceful Lady [n°14]. Yet, while the influence of courtly poetry is manifest, it has its limits: he sees wrong and hears wrong, who turns away from Mary to go to Marot [n°16] warns Gautier de Coincy in his adaptation of a secular motet praising the merits of a certain lady called Marot. The motet itself originated from a Notre- Dame School organum (Benedicamus Domino [n°17]).

Medieval poetry also includes many prayers of intercession: make haste and take pity on this troubled world [n°3], so that we may follow the example of Christ: you who lead us to the kingdom of the Lord Jesus… may your love reconcile us to Jesus! [n°14] The cantors themselves are not forgotten: inspire this choir [n°15], hear this choir singing, glorious mother of the Redeemer [n°9]. 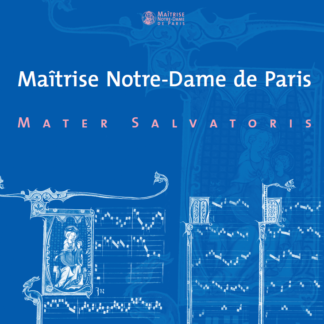