View cart “CHRISTMAS AT NOTRE-DAME DE PARIS” has been added to your cart.

We know how enthusiastically Mendelssohn organized the first modern performance of Bach’s St Matthew Passion in Berlin in 1829, an event which was to launch a craze for choral music and which Mendelssohn was the first to take up.

Virtuoso organists such as Mendelssohn himself, Brahms and Rheinberger are without doubt the three composers who most successfully followed in Bach’s footsteps. Through them Germany acquired an image as a pious nation, but also one which drew the strength to undertake its renewal from its roots. Indeed, indebted as they were to the music of the past (not only Bach, but also Handel, Schütz or Palestrina), the three composers never abandoned their own personal sensibility, which was very much a reflection of their time.

What unites them appears as much as what separates them in this program conceived in the manner of a liturgy!: on the framework formed by the pieces of the commons – the six movements of the Rheinberger mass – are grafted the motets of Brahms and Mendelssohn corresponding to the proper time, as in an office.

Yves Castagnet accompanies the Maîtrise of Notre-Dame de Paris cathedral on the choir organ, joining the grand organ at the podium for the flamboyant Mendelssohn’s Sixth Sonata. 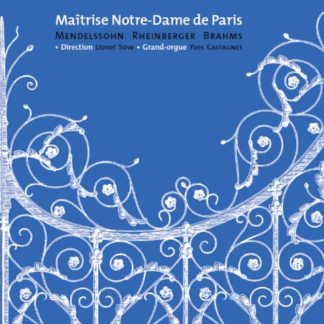