View cart “GERMAN ROMANTIC MUSIC” has been added to your cart.

Commissioned by Musique Sacrée Notre-Dame de Paris for the closing of the 850th anniversary of the cathedral, Philippe Hersant’s Vespers of Virgin Mary involves the entire musical system of Notre-Dame de Paris: the two organs, the Maîtrise, as well as the ensemble Les Sacqueboutiers and the soloists Alain Buet and Robert Getchell, under the direction of Lionel Sow.

Philippe Hersant weaves one of his most important compositions for sacred art, intimately elaborated for this emblematic place, on a strong and symbolic text, thus placing the cathedral and its 850 years of musical history in the heart of the 21st century.

When we started planning the jubilee project, the first challenge was to find the right music for this milestone year. The question was: what kind of musical work should we commission? An oratorio? A Passion?

The festivities must be opened with Monteverdi’s Marian Vespers. Now we had a starting point, but what should be the high point of the year? We agreed that it was time to open a new chapter in the musical life of the cathedral and to look further into the (still young) 21st century – and beyond. Why not commission a contemporary setting of the Marian Vespers – a modern equivalent of the revered masterpiece, an inviting welcome for all pilgrims in this jubilee year? Such a mission could only be entrusted to a composer whose choral oeuvre was recognized and appreciated. Philippe Hersant was a natural choice.

Which instruments would be adequate? What about the vocal and instrumental soloists? Answers came naturally and progressively in a dialogue woven over the Maîtrise concerts. Philippe Hersant, who makes no secret of his preference for the timbre of early instruments, fell under the spell f the early brass ensemble Les Sacqueboutiers. Alain Buet, our faithful partner, would be the cantor of the new piece. So there we are, everything is set and ready. All we have to do now is… do it! And it is no small task! The intimidating grandeur of the performance of Monteverdi’s formidable work (December 2012) also left its mark on Philippe Hersant’s compositional approach.

A few months later, we had the pleasure of discovering the new piece. That pleasure was renewed at the first sight-reading session… The feeling of excitement and enthusiasm as we discovered the music, the necessary commitment and hard work involved, the final exchanges between composer and performers over a few practical adjustments… what a fascinating experience! We are at the very heart of contemporary music creation. We are (again) at the helm of this great artistic vessel with a long tradition of fine music-making. Traditionally, cathedrals have always welcomed artistic creativity – as the expression of God’s praise or as an echo of Man’s cry of distress.

The tradition is alive. 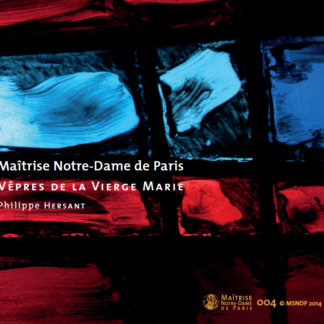