View cart “THE BOOK OF NOTRE-DAME” has been added to your cart.

Chronics and musics from the 13th century

Situated between the polyphonic and rhythmic innovations of the School of Notre-Dame (late 12th century) and those of Ars nova (14th century), the music at the time of Saint Louis is as rich. With it comes a poetic and literary work of high quality.

Using the music of his time and the testimony of his biographers, the program of this disc is therefore an illustration of King Saint Louis’ life. In the first part are described the main stages of his life, and in the second part his “ascent to Jerusalem”. From his youth he devoted a fervent cult to the relics of the Passion of Christ. In 1239 he acquired the Crown of Thorns [cf. n ° 20-22] for which he erected the Sainte-Chapelle, image of the temple in Jerusalem. The two crusades he undertook [cf. n ° 2 & 23-26] did not allow him to enter the Holy City. But it is with his death that metaphorically, he reached the heavenly Jerusalem [cf. n ° 28 & 29], while his memory remained alive… [cf. n ° 30-32]. 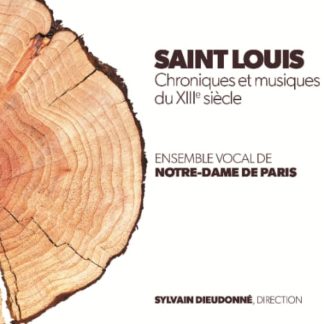